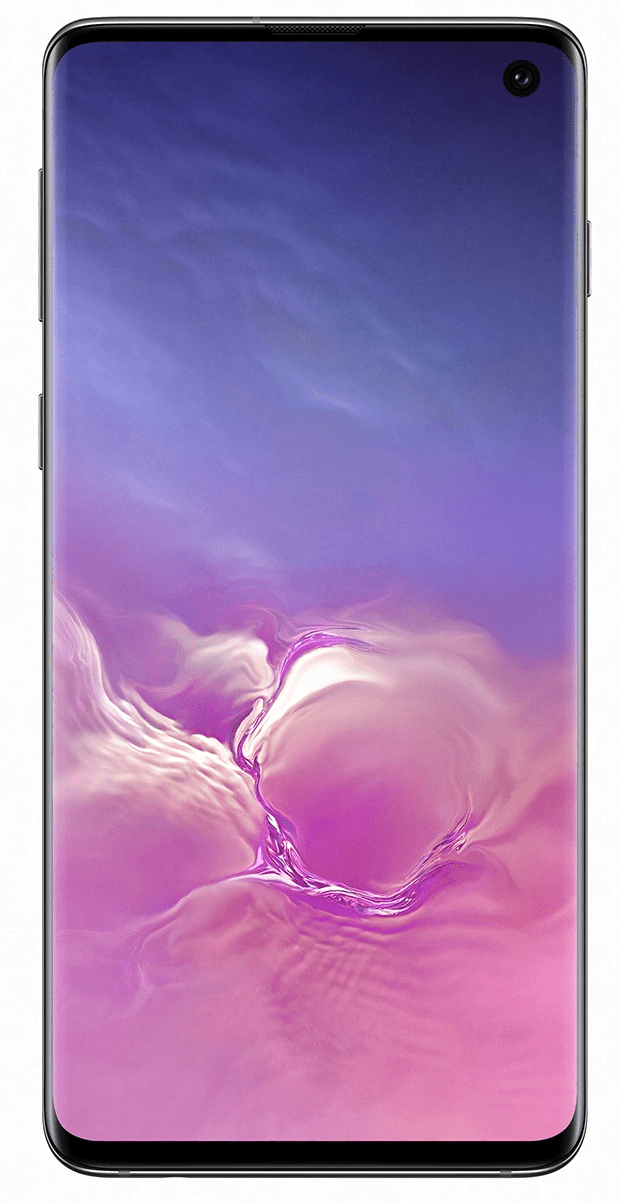 The tenth phone in Samsung’s much-lauded Galaxy S series is an impressive refresh of the previous model, the Galaxy S9. With some nifty hardware upgrades, slick software and novel design changes, the Samsung Galaxy S10 is a superb all-round phone.

One of the S10’s most striking new features is its gorgeous 6.1-inch Infinity-O display - an edge-to-edge screen with a laser cut ‘punch-hole’ in the top right corner for the front camera. It’s a novel new look and a sleeker take on the notches we saw last year. The display also features an invisible in-screen fingerprint sensor, and there’s a new triple-lens camera with the ability to take ultra-wide photos. Whilst the S10 isn’t a huge reinvention from previous models, reviewers agree that it’s an excellent all-rounder, with Gizmodo calling it ‘a celebration of smartphone tech sophistication’ and Digital Trends calling it ‘the do-it-all phone you want’.

The overall look of the S10 is similar to the S9, with a few enhancements. A thinner aluminium frame is housed between smooth glass panels, with the back coming in six different colours: Flamingo Pink, Prism Black, Prism Blue, Prism White, Canary Yellow and Prism Green.

The in-screen ultrasonic fingerprint sensor combines with a very subtle camera bump on the back to give this phone a clean, elegant finish. There’s also a reverse wireless charging module located below the rear camera, which handily allows you to charge your friends’ phones - though Samsung has cleverly managed to conceal this completely too.

As TechRadar noted, all that sleekness does make it a little slippery to hold - although a case will easily solve that problem.

Samsung is famed for its exceptional smartphone displays, and the S10 doesn’t disappoint. The 6.1-inch Super AMOLED panel is big, bright and beautiful. DisplayMate, the world’s leading display authority, found it to be the most colour-accurate display ever, describing its colour accuracy as ‘visually indistinguishable from perfect’.

The Infinity-O screen is a standout new feature, with the bezel-less edges, larger display size and punch-hole camera giving you more screen space than ever. Even with a larger screen (the S9’s was 5.8 inches) Samsung has managed to make the S10 noticeably thinner and lighter than the S9, and only marginally taller and wider.

The S10 has seen a significant upgrade under the hood. It’s powered by the new Exynos 9820 processor, which is powerful enough to handle pretty much anything with ease. Coupled with 8GB of RAM (compared to the S9’s 4GB), it makes for a slick user experience.

The battery has been bumped up too - it’s now 3,400mAh (compared to 3,000mAh in the S9), although the bigger screen is likely to eat up some of that extra battery power. Samsung claims a single charge will last 24 hours.

In good light it takes excellent photos, with sharp detail and vibrant, accurate colours. It also performs well in low light, although it lacks a night mode to rival those seen on Google and Huawei’s latest phones. The ultra-wide lens has a 123-degree field of view, allowing you to fit much more into the frame, although it sometimes creates a bit of a fisheye effect.

Overall, it’s a fantastic camera, with the Guardian calling it ‘as good as the best of its rivals’ and TechRadar saying ‘it ranks among the best camera phones for 2019’.

Every day, we search through thousands of tariffs and offers from UK online retailers to find the best Samsung Galaxy S10 deals and contracts across a selection of price points and needs.

Finding the perfect deal is easy. Just use the sliders to filter tariffs for minutes, data, monthly cost and upfront cost. You can also filter by network and retailer to find the best Samsung Galaxy S10 deal for you!

The cheapest contract price in this category is cheaper than buying the Samsung Galaxy S10 SIM Free and a comparable SIM Only tariff by .
View SIM Only Contracts View SIM Free Prices

You could save on the cheapest contract price in this category by buying the Samsung Galaxy S10 SIM Free and a comparable SIM Only tariff separately.
View SIM Only Contracts View SIM Free Prices