How to Maximise Your Mobile Phone Coverage

There's nothing quite like the frustration of having bad mobile phone coverage in a time of need.

Whether it's for making calls, chatting with friends, listening to music or surfing the web, most of us depend on our phones to some extent. So having our trusty devices rendered useless by poor signal is at best irritating, and at worst disastrous.

Mobile phone coverage across the UK is improving. At the end of 2017, 90% of indoor premises had telephone call coverage from all networks, while 85% had mobile data coverage. These figures were up from 85% and 80% respectively the previous year. Also, the four UK mobile network operators (EE, O2, Vodafone and Three) were required, under the terms of a 2014 agreement with the government, to increase their voice coverage to 90% of UK landmass by December 2017. All four networks achieved this, and communications regulator Ofcom is working with them and the government to continue the upward trajectory.

However, not all networks are made equal, and mobile phone coverage varies from area to area. If you're thinking about changing networks, picking one with a good signal in the places you live, work, and commute should be a top consideration. To make things easier we've collected all the essential facts and figures into this handy guide, so you can see which networks have the best mobile phone coverage and make an informed choice.

What do we mean by mobile phone coverage?

If we asked you to define 'mobile phone coverage' right now, what would you say? Are you talking about making calls? Internet access? Both?

When networks talk about having the best mobile phone coverage, they're normally referring to how easily you'll be able to connect to their 2G, 3G, 4G or 5G services.

When we use 'G', it's referring to a generation of mobile phone technology:

Who has the best mobile network coverage in the UK?

The tables below show a variety of different statistics for each of the UK's four major networks, to give you a picture of the extent, reliability and speed of their mobile phone coverage.

EE's mobile phone coverage is consistent - whether you're indoors or outdoors the voice and data coverage is relatively equal, even if the outside voice coverage is a little low at 79% compared to the likes of Vodafone and O2 who have 86% and 84% respectively.

Where the network is ahead of the competition, however, is in its 4G speed and coverage. EE has the highest 4G coverage out of the four major networks and shines on its average 4G speed  - with a full 6.7mbps over its nearest competitor (Three's average 4G speed is 22.3 Mbps).

In their own words, EE are ‘leading the way on 5G rollout’, covering 80 cities and towns across the UK. They have also aimed to provide 5G coverage to areas with large footfall, such as tourist attractions and shopping centres. More details on their 5G coverage can be found on the EE 5G page.

Vodafone's mobile coverage is extensive, with the highest voice coverage outdoors (beating O2 86% to their 84%) and the second highest indoors (pipped to the post by O2 97% to 98%).

While data speeds may not be substantially higher than its competitors, data coverage is high at 96% indoors and 77% outdoors respectively.

Vodafone's 5G coverage is now live in 44 towns and cities across the UK, as well as 70 5G locations across Europe.

While Vodafone may not necessarily excel compared to other mobile networks, its consistently high phone coverage make it a good choice of network for anyone who values a signal.

O2's mobile network coverage is fantastic if you're inside, with the highest voice and data coverage indoors at 98% and 97% respectively.

Their outdoor coverage is also comprehensive, with the second highest voice coverage of the four networks at 84%.

However, compared to the other networks, O2's major failing is its speed - with 15.1 Mbps and 4.6 Mbps respectively it has the slowest 4G and 3G speeds of any of the major networks.

O2 was the last of the UK's network coverage providers to roll out a 5G network, beginning their launch in October 2019. O2’s 5G coverage is currently live across 60 towns and cities in the UK including London, York and Edinburgh.

O2 has aimed to target their 5G coverage to transport hubs, key business areas and entertainment and sports venues. More details on their rollout can be found on the company's dedicated 5G page.

O2 offers a large range of voice and data network coverage. However, this large range is undercut by the slower speed of its 4G and 3G networks.

Three's mobile network coverage is almost the inverse of O2's: it has fast 4G (22.1 Mbps) and 3G (6.1 Mbps) speeds but in return has the weakest coverage out of the four major networks.

However, Three provides the lowest amount of 4G coverage of the major networks. At 57.1%, it's significantly below its nearest competitor (Vodafone's 4G availability is 71.4%). Outdoor data coverage is also 5% lower than its competitors.

Three's 5G coverage is available in select postcodes across the UK including London, Edinburgh and Cardiff. The provider is promising to be 'the UK's fastest 5G network' when it is fully operational across the UK.

Overall, picking Three will provide fast online experience when it's available. Yet despite its speed, Three is unable to provide the breadth of mobile network coverage of its competitors. 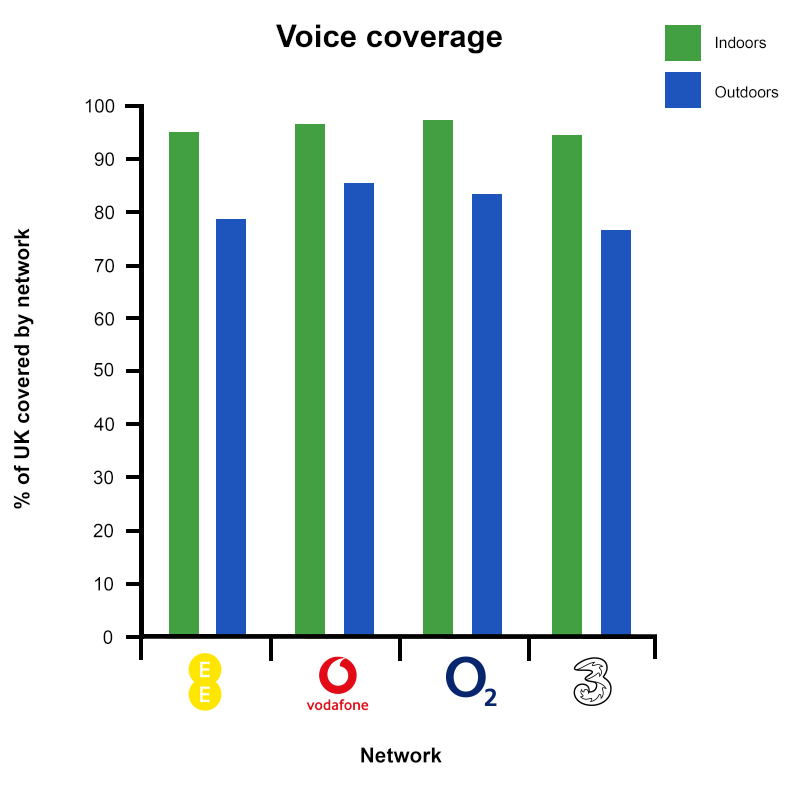 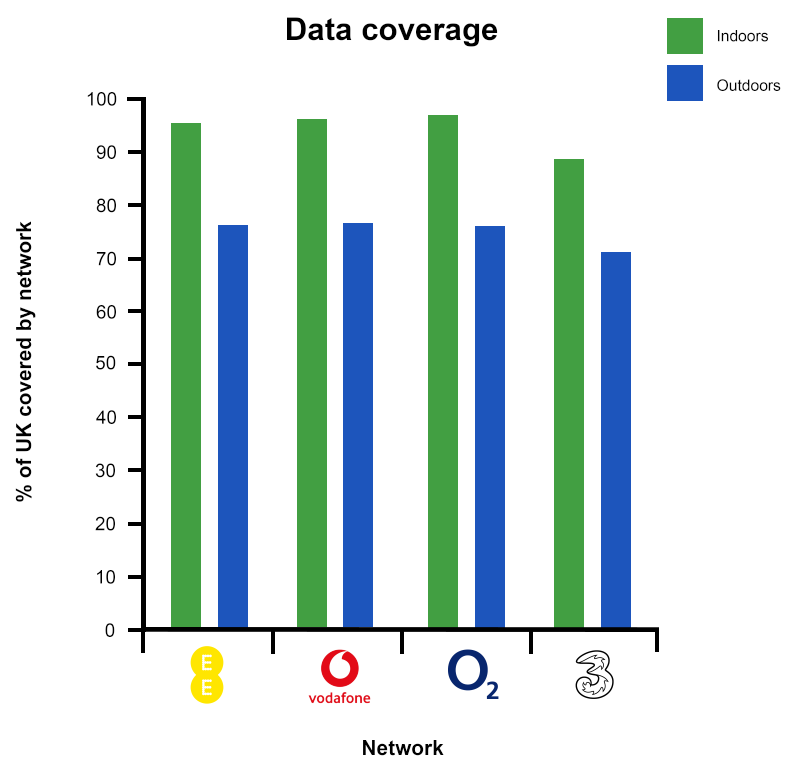 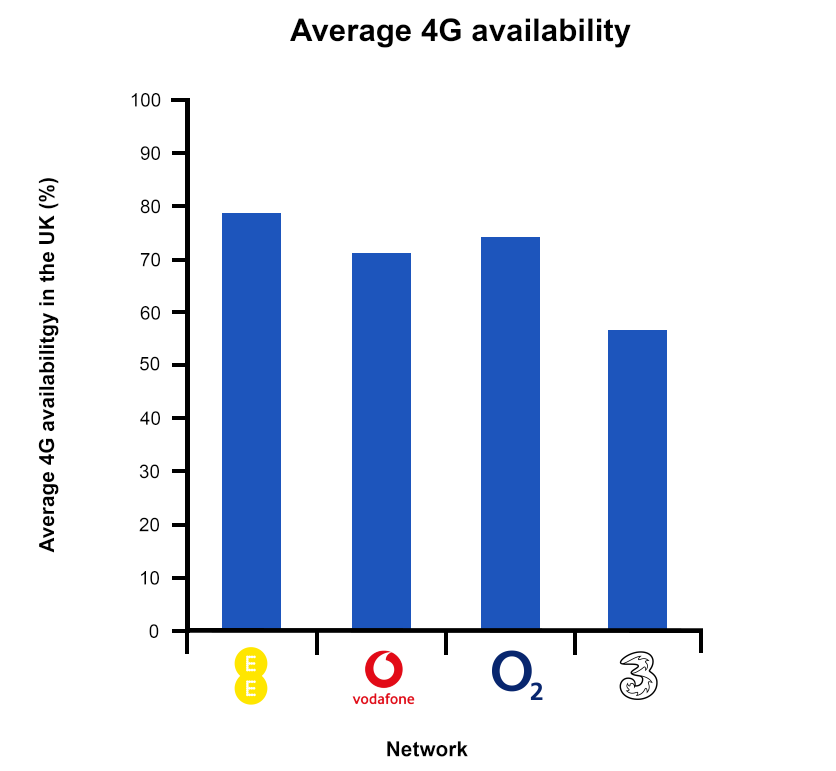 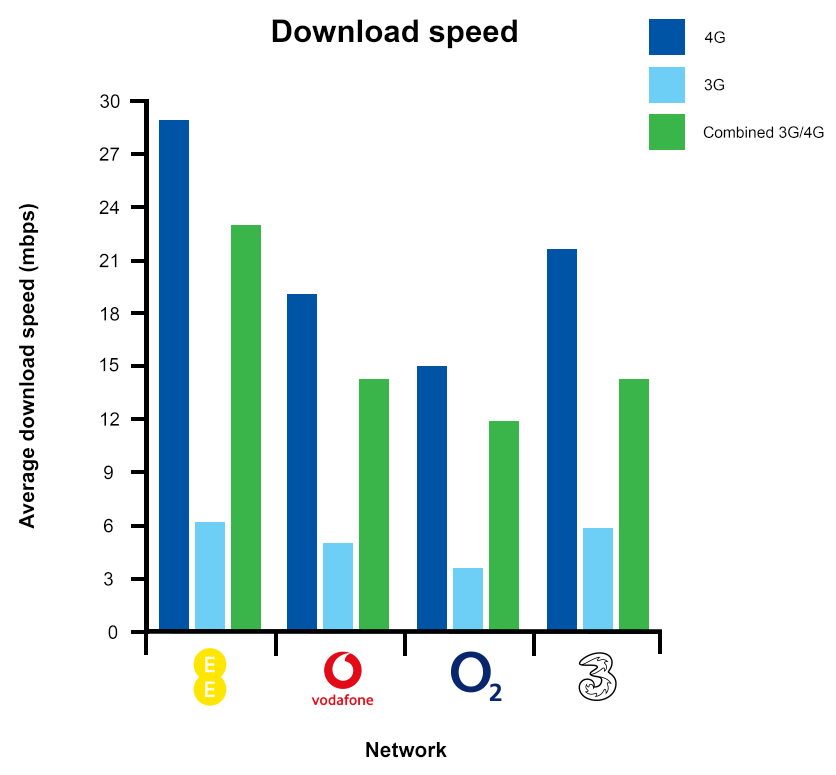 What if I'm not on one of the major networks?

There are actually only four mobile networks that own and operate mobile infrastructure in the UK: EE, O2, Vodafone and Three. These are known as mobile network operators, or MNOs.

This means that, in terms of mobile network coverage, each MVNO is the same as the MNO it 'piggybacks' on.

Which operators do the MVNOs use?

The chart below shows some of the major MVNOs, and the MNOs they lease infrastructure from. If you're thinking about choosing one of the MVNOs, check out the stats for the corresponding MNO to see what coverage is like. 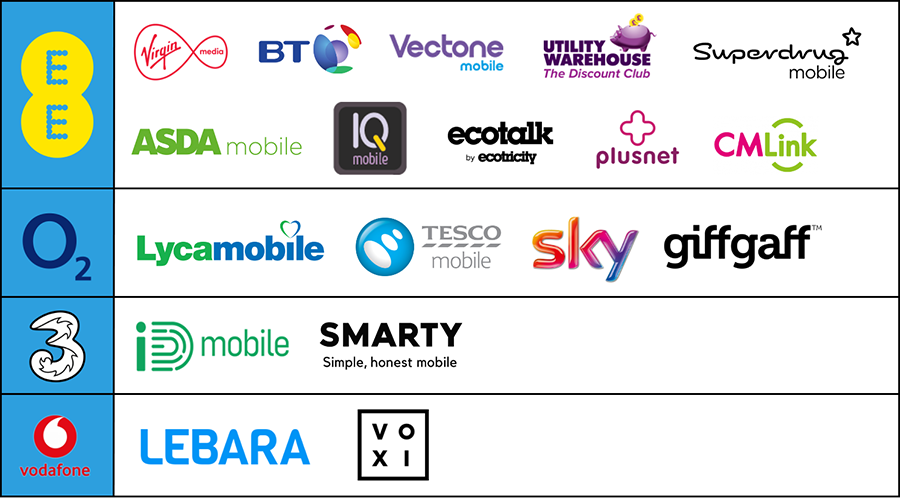 How can I check mobile phone coverage in my area?

Each of the four major networks provides a coverage checking tool which lets you put in your postcode and find out how strong their signal is in the surrounding area - allowing you to see the best mobile phone coverage by postcode. 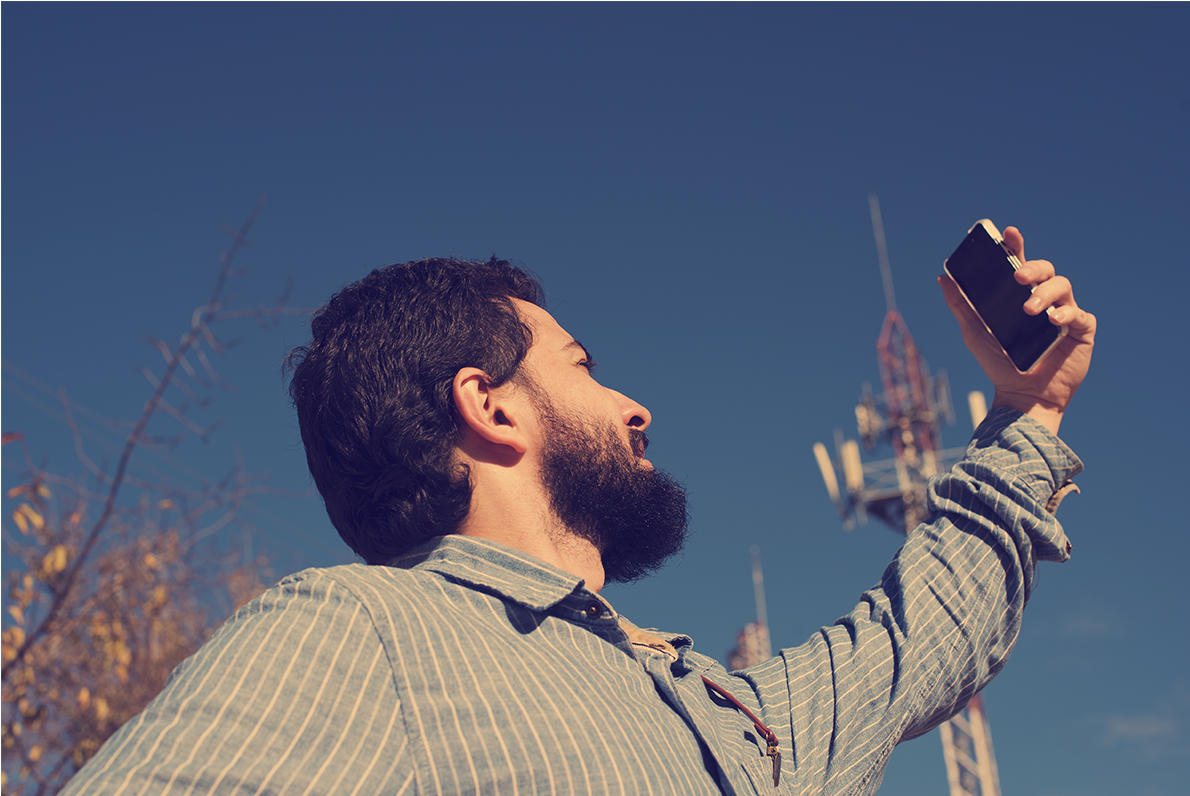 Each network's mobile phone coverage map is different, and although they're mostly accurate, they do have their limitations. The coverage they indicate for your area may not be exactly what you'll receive, especially if you live in an area that's on the edge of good and bad mobile phone network coverage.

If you're after a less biased approach, check out one of these independent coverage maps:

Ask friends and family about their signal

Of course, this method won't be completely unbiased. Some of the people you ask may have had a bad experience with a certain network, meaning they'll advise you to avoid them regardless of signal quality. But if you can get them past these experiences - or recruit people who are happy with their network - consider inviting them over to your house and testing out their phone signal and mobile internet connection. Make sure you test the coverage in the rooms where you spend most of your time.

Get a test SIM card

If you can't find any friends or neighbours willing to be your mobile phone coverage guinea pigs, you could get a test Pay As You Go (PAYG) SIM card on your network of choice. Put it in your phone and use it as you would usually for a few days to get an idea of that network's performance.

It's easy to get hold of a PAYG SIM card - most networks will give you one for free if you buy £10 credit. This is a small price to pay if it means you don't end up shelling out for a long, expensive phone contract with a network that doesn't have good mobile coverage in your area. You can get hold of free PAYG SIMs by ordering them online at the following links:

What can I do to improve my mobile phone signal?

If you don't want to change your network but still want the best mobile network coverage, you could try these options:

Use wifi for calling and texting

Lots of apps allow you to make calls over wifi, including Skype, WhatsApp and Facebook Messenger. However, these usually depend on the person you're calling having the app or being online at the time.

Some of the smaller networks also offer wifi calling, so check their individual websites to find out.

Use a mobile signal booster

If you can't get a good signal at home on any of the networks, consider using a mobile signal booster. It's best to go for the device offered by your network rather than buying one from a third party. The devices offered by networks are called femtocells, and each of the MNOs offers its own solution:

EE's Signal Box plugs into your broadband router and creates indoor coverage within a range of around 15m.

Vodafone's Sure Signal V3 fits straight into a standard plug socket and works through your broadband connection, creating an indoor signal, though is no longer available to buy (Vodafone recommends Wifi Calling as an alternative).

O2's Boostbox is available for business customers and uses an office or home office broadband connection to create a hotspot.

Three's Home Signal connects to your broadband router and sends out a signal within a range of around 15m.

Some third parties sell a different sort of device, known as a signal repeater, which amplifies the mobile signal between the network and the phone. Previously it was illegal for consumers to use these devices, although the law has recently changed to allow their use if certain technical requirements are met. However, many signal repeaters are unlikely to meet these requirements, so be careful!

The information on voice and data coverage was taken from Ofcom's Connected Nations Report 2017, which was published in December 2017. These metrics show the percentage of the UK, both indoors and outdoors, where it's possible to get a complete, uninterrupted signal for both voice calls and data services.

The information on network availability and speed was taken from analysis conducted between June-August 2017 by OpenSignal and Which?. The 4G availability metric shows the percentage of the time it's possible to get a 4G signal, whilst the speed metrics show the average performance of each network's 3G and 4G signals.