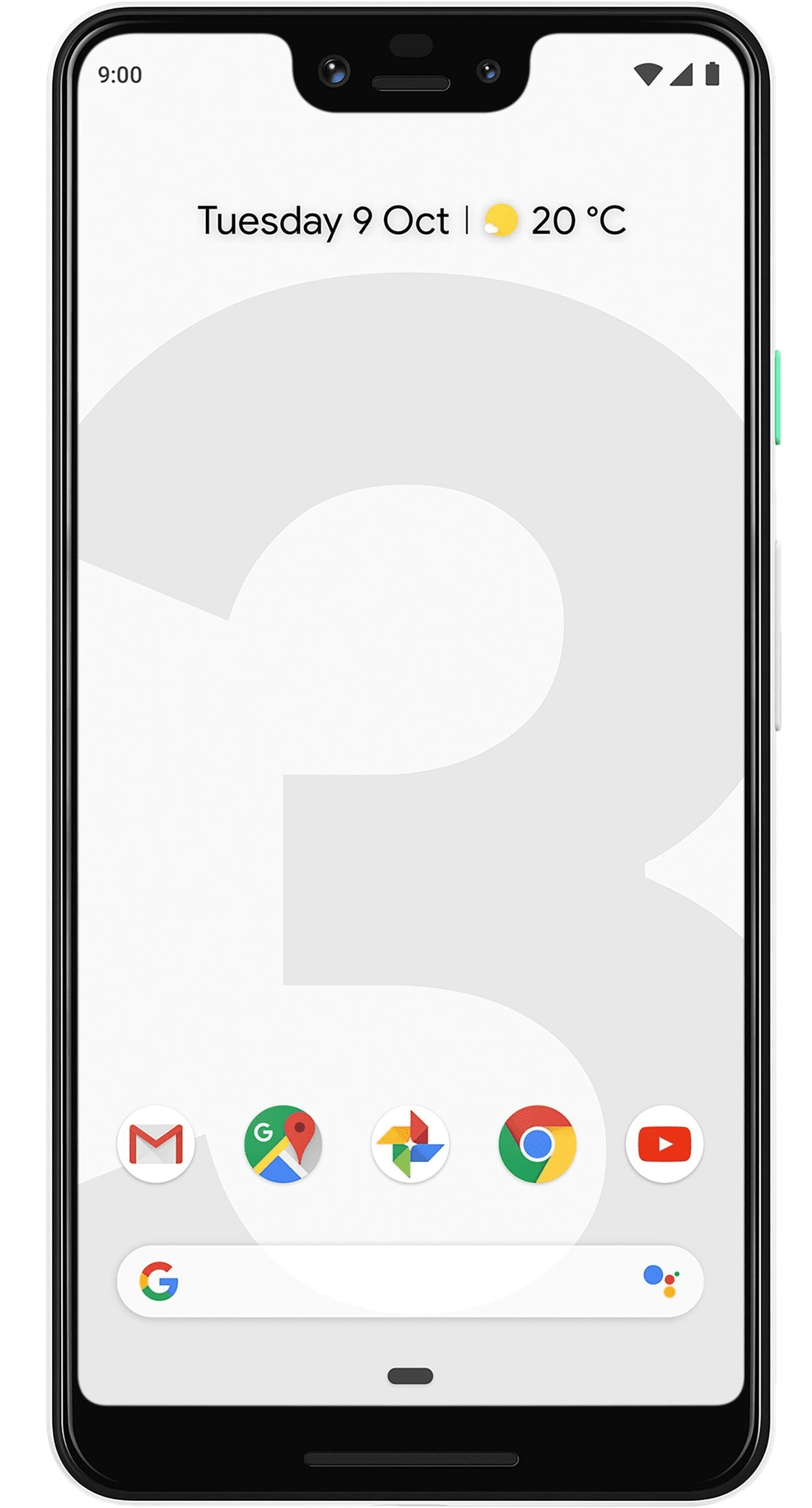 The latest in Google's flagship line builds on the already-decent Pixel 2 XL, with an improvement to its predecessor's troublesome screen and some fantastic new camera functions.

The Google Pixel 3 XL, the bigger brother of the Pixel 3, boasts almost identical features to its smaller sibling  which is no bad thing  but with a larger display and a notch on the top of the screen.

The Google Pixel 3 XL marks another step up for the Pixel range with a number of improvements on its predecessor, including arguably the best big-screen camera on the market.

It comes with a more modern look, ditching the previous metal/glass combination on the back and opting for an attractive all-glass look. The OLED display, which reportedly suffered issues in the Pixel 2 XL, is now much clearer and the camera is one of the best around.

Tom's Guide said "among big-screen phones, the Pixel 3 XL is the one to beat when it comes to camera performance and AI'. Digital Trends added 'it has the absolute best software experience on any Android phone, period."

The Pixel 3 XL is a modern-looking phone with a similar, yet slightly larger, design to its predecessor. For this latest model, Google has opted for an elegant all-glass two-tonal finish on the back, which provides good grip without showing fingerprints.

The most noticeable difference between the Pixel 3 XL and the smaller Pixel 3, however, is the opinion-dividing notch.

While some may find this an eye-sore, the notch allows for a large 6.3 inch screen while still accommodating the two market-leading selfie-cameras and one of the phone's excellent front-facing speakers.

After reported issues with the Pixel 2 XL's display, Google has made excellent improvements to its latest model.

It also comes with Android 9 Pie's nifty Adaptive Brightness, which learns how you set your brightness slider in different lights, and then automatically adjusts it for you.

The Pixel 3 XL is powered by Qualcomm's Snapdragon 845 chipset and 4GB of RAM  powerful enough for the majority of users.

It's the same processor you'll find in most flagship Android phones in 2018 and the result is a smooth and speedy experience.

The Pixel 3 XL also comes with a 3,430mAh battery, which is actually smaller than the Pixel 2 XL's 3,520mAh. However, don't let that put you off. Efficiency improvements come with increased use thanks to Android Pie's Adaptive Battery technology, which limits power usage to rarely-used apps.

The Pixel 3 XL's most exciting feature is probably its amazing camera, which is undoubtedly one of the best on the market.

On the rear you will find a single 12.2MP camera with an f/1.8 aperture, while on the front you get two 8MP cameras, one with a f/1.8 aperture and the other a wide-angle lens with a f/2.2 aperture.

However, the upgrade truly comes with the new software features that will help users to produce excellent shots. One highlight is the new Top Shot mode, which captures a burst of photos and automatically highlights the best. It eliminates the chance of a ruined photo thanks to a mis-timed blink or a sneeze.

Elsewhere, the Super Res Zoom mode reduces noise when the user digitally zooms in, making up for a lack of second telephoto lens.

Android Authority said "what matters most is consistency, and the Pixel 3 is the most reliable camera I have."

Like its smaller sibling, the Google Pixel 3 XL comes with Android 9 Pie already installed, which means a new set of navigation gestures. It might take some getting used to but that shouldn't take long.

That's a small price to pay, however, with the new OS bringing plenty of exciting new features to users. One useful addition for those looking to cut down on screen time is Digital Wellbeing; with this feature, users can track how often they check their phone every day. They can then set App Timers that limit time spent on each app and block out all notifications for a period of time with a Do Not Disturb function.

Every day, we search through thousands of tariffs and offers from UK online retailers to find the best Google Pixel 3 XL deals and contracts across a selection of price points and needs.

Finding the perfect deal is easy. Just use the sliders to filter tariffs for minutes, data, monthly cost and upfront cost. You can also filter by network and retailer to find the best Google Pixel 3 XL deal for you!

The cheapest contract price in this category is cheaper than buying the Google Pixel 3 XL SIM Free and a comparable SIM Only tariff by .
View SIM Only Contracts View SIM Free Prices

You could save on the cheapest contract price in this category by buying the Google Pixel 3 XL SIM Free and a comparable SIM Only tariff separately.
View SIM Only Contracts View SIM Free Prices