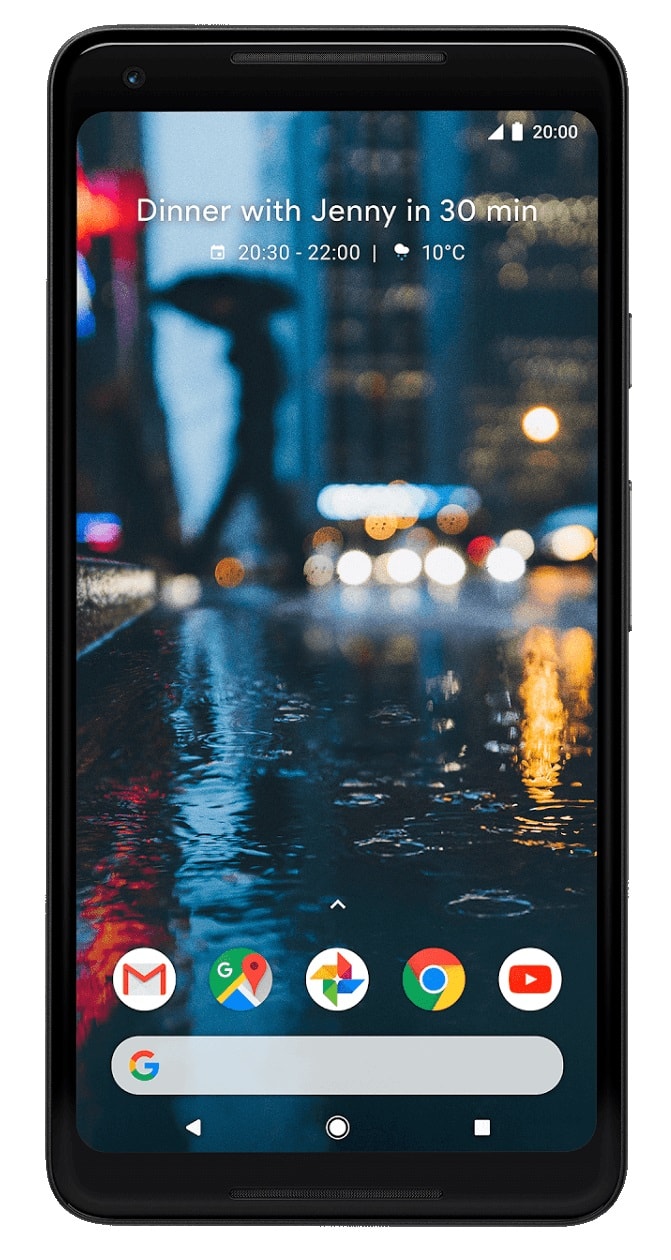 The larger version of Googles latest flagship offering reshapes and refines the already winning formula of 2016s Pixel XL, with waterproofing, an improved camera and a sleek, bezel-less design.

The Google Pixel 2 XL is not only larger than its smaller sibling, the Pixel 2: it also stands out aesthetically. Google has joined the likes of Samsung and Apple and opted for a bezel-less display, although the release of the phone has been somewhat overshadowed by reviewers who were disappointed by issues with screen burn-in after just a week of use.

Its a striking look, and any reports of screen issues aside it still boasts quad-HD+ resolution, prompting Trusted Reviews to say it comfortably feels like the more exciting option of the two 2017 Pixel devices. Whilst the lack of a headphone jack may disappoint, the Pixel 2 XL makes up for it in other areas - most notably its exceptional camera, but its dual front-facing speakers are also a plus.

Aside from the bigger, better screen, the Pixel 2 XL also has a bigger battery than its smaller sibling - 3,520mAh compared to 2,700mAh - and a corresponding price hike. TechRadar's reviewer thought the device offered a decent amount of reason for the price madness - and those who value handsets with big, beautiful screens are likely to agree.

From the back, the Pixel 2 XL looks similar to the Pixel 2. Google has reprised the opinion-dividing glass and metal combination from last time, but this time the two materials have been blended more subtly. The glass panel has become smaller, meaning the fingerprint scanner now sits underneath it in the metal section, so you should get fewer smudges on the glass.

From the front, the Pixel 2 XL has had a contemporary update. The chunky bezels of last years device have made way for a big, beautiful bezel-less screen, putting the focus firmly on the display.

Its not quite edge-to-edge, meaning its less impressive than Samsungs latest offerings, but it still looks great: as The Verge pointed out, its not super noticeable, and the screen does still look rather gorgeous.

The Pixel 2 XLs display is what really sets it apart from the Pixel 2. The 6-inch OLED screen is sharp and vibrant, and has a more elongated 18:9 aspect ratio. It also has full coverage of the RGB spectrum for more accurate colour reproduction.

Google has upped the resolution to 2880 x 1440 pixels, making it the best option out of the two handsets for virtual reality.

Despite initial reports offering great praise for the Pixel 2 XLs display, there have been more recent reports of screen burn-in on the Pixel 2 XL - although screen burn-in isnt an uncommon issue when it comes to OLED displays, its somewhat concerning that this would be showing up after just a week of use.

The term burn-in is used to describe issues with a display which is suffering from reviewers are still remaining very positive about the Pixel 2 XLs impressive features, and are not willing to let these somewhat minor screen issues dissuade them from an overall positive review of this new Google handset.

A notable new feature is its always-on display, which means you can see handy bits of info like the time, date, reminders and text and email notifications even when the screen is technically off.

One neat addition is that the phone automatically detects and identifies music playing around you, and displays the song details on the always-on screen.

The Pixel 2 XL is powered by a Snapdragon 835 processor coupled with 4GB of RAM - a step up from the Pixel and Pixel XL, which were very speedy performers.

The upgraded innards should make for a slick user experience. The pure, unmodified Android software should provide further efficiencies, resulting in a smooth, fast experience.

The Verge found it had made a big leap over last years Pixel camera, and TechRadar called it truly impressive.

This time Google has added optical image stabilisation, which should mean clearer, less blurry photos and videos, and a dual-pixel sensor, which means that each individual pixel is made up of two smaller ones.

This enables the new Portrait Mode, which is like Apples, except Google has managed it with a single lens rather than a dual-lens setup. And, unlike Apples offering, the Pixel 2 XLs Portrait Mode also works on the front-facing 8MP camera.

The Pixel 2 XL features Android in its purest form, which, according to Trusted Reviews, is still the best way to experience it. It runs the latest version, Android 8 Oreo, and has changed things around a bit since last time.

For example, the Google search bar has been moved to sit at the bottom of the home screen, which may take a little getting used to.

The biggest change is that you can launch the Google Assistant by squeezing the sides of the phone. Once youre used to it, it looks set to be really useful. The Pixel 2 XL will also come with Google Lens, the companys new object-recognition technology. Google says it will initially be able to recognise books, movie posters, business cards and landmarks, which should be a nifty feature if it works.

Every day, we search through thousands of tariffs and offers from UK online retailers to find the best Google Pixel 2 XL deals and contracts across a selection of price points and needs.

Finding the perfect deal is easy. Just use the sliders to filter tariffs for minutes, data, monthly cost and upfront cost. You can also filter by network and retailer to find the best Google Pixel 2 XL deal for you!

The cheapest contract price in this category is cheaper than buying the Google Pixel 2 XL SIM Free and a comparable SIM Only tariff by .
View SIM Only Contracts View SIM Free Prices

You could save on the cheapest contract price in this category by buying the Google Pixel 2 XL SIM Free and a comparable SIM Only tariff separately.
View SIM Only Contracts View SIM Free Prices