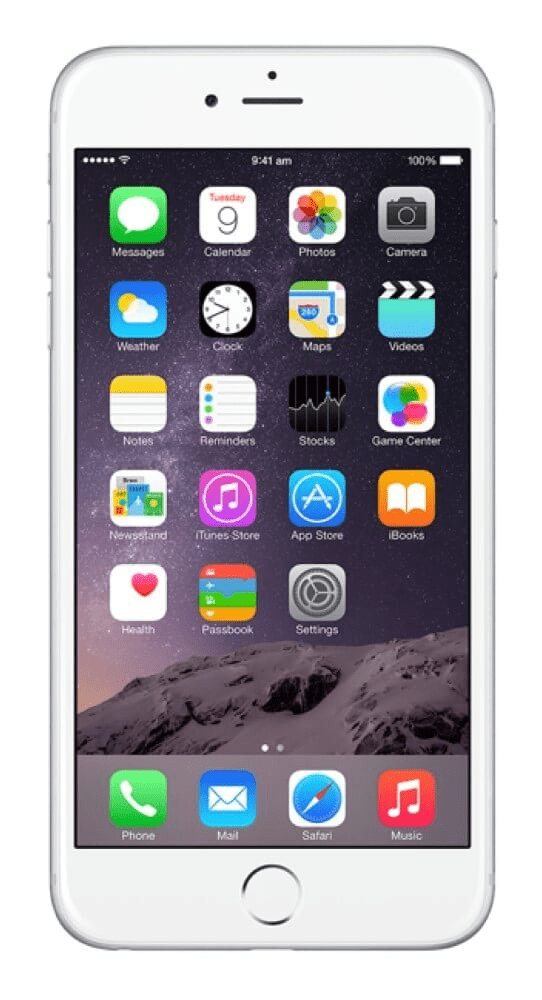 The iPhone 6 was released in 2014, marking a key turning point for Apple. With a new design and a larger screen, it completely rethought the iPhones of old. At the time, its combination of powerful hardware and innovative software made it one of the best smartphones ever seen.

The Apple iPhone 6: in more detail

The iPhone 6 is now several generations old, having been usurped most recently by the incredibly powerful iPhone X. But the 6 is still available, and is still a solid handset.

At the time of release, the iPhone 6 addressed a number of problems that previous Apple handsets had suffered from. It had a larger screen, a better camera, a more powerful processor, improved battery life and a complete design overhaul. Despite these innovations, it was still very much 'on brand' as an iPhone, exemplifying Apple's attention to detail, high quality construction and seamless integration of hardware and software.

Four years on it's beginning to show its age but is still an impressive device, and according to TechRadar, one of the best phones Apple has ever created. For Apple fans looking to pick up a bargain, it's a great choice.

The iPhone 6 marked a departure from previous Apple handsets, with a much thinner, sleeker design replacing the industrial look of its predecessors. The slimmer size and rounded edges mean the device fits neatly into your hand and is comfy to hold.

The stainless steel rear casing meets with the curved edges of the screen almost seamlessly. Except for a small amount of plastic detailing on the back, the phone is all metal and glass, creating a beautiful, premium-looking handset. Whilst it's bigger than the iPhones that came before it, it's almost exactly the same size as the iPhone 7 and iPhone 8 so if you're familiar with the newer handsets you'll feel at home with it. In fact, it's marginally slimmer so it should be even more manageable.

If you were amongst those who were disappointed by Apple's removal of the headphone jack from the iPhone 7 and subsequent devices, the iPhone 6 should be a breath of fresh air, as it came out a full two years before that particular design upgrade. There is a slight bump on the back of the phone to accommodate the rear camera, meaning the phone doesn't quite lie flat - but it's a minor quibble, and worth it for the higher-quality camera that extra protrusion allows for.

The iPhone 6's 4.7 inch display saw a significant upgrade from its predecessor, the 5s, with increased size and resolution and improved colour reproduction and power efficiency. Some reviewers criticised Apple for not going Full HD with the iPhone 6's screen, in keeping with contemporaries like the Samsung Galaxy S7. However, it's still sharp, and Expert Reviews found that it was actually sharper than some Full HD competitors at the time. In fact, Apple has kept the screen specs virtually the same in every handset prior to its latest, the iPhone X. The iPhone 7 and 8 both have the same screen size and resolution as the 6, and although the newer phones have improved on colour and brightness, they prove that the lack of Full HD alone shouldn't be enough to put you off.

The screen features 'dual-domain pixels', which are designed to improve the viewing angles when you're not directly in front of the screen. At the time of release, Engadget said its viewing angles were 'among the best', and Expert Reviews said 'even looking at the screen almost edge on we couldn't detect any noticeable colour shift'.

Although it's a long way behind the latest flagships, the iPhone 6's display has good contrast and black levels, solid brightness and colour reproduction and plenty of detail. While TechRadar was disappointed by the fact it didn't make use of the very best display technology, most reviewers were impressed and it's still a perfectly good screen that should make for a pleasing viewing experience.

The 8MP camera on the iPhone 6 has almost identical specs to the one on its predecessor, the iPhone 5s. But since the 5s had a very good camera, that's not necessarily a bad thing. The inclusion of 'Focus Pixels' (Apple's name for phase-detection autofocus) does make focusing quicker and more effective, offering some improvement on the quality of images produced. TechRadar said the Focus Pixels helped somewhat, although they 'didn't notice any big jump in functionality compared to the iPhone 5s', while Engadget found the 6 was 'considerably better at producing focused images'.

Another feature that was new on the iPhone 6 was the ability to adjust the exposure of a photo manually. This feature is activated by sliding a finger up or down the screen to brighten or darken the shot. The phone also offers HD video recording, high resolution panorama shots and slow motion video. The Verge said that 'at 240 fps even the most mundane activity becomes awesomely cinematic. Everything looks cool slowed down that much. Everything.' Although this has now been far surpassed by newer smartphones - most recently by the Samsung Galaxy S9 with 960 fps super slow-mo shooting - the iPhone 6's slow motion mode still produces impressive footage.

In practice, the camera is capable of capturing some great shots and works well in low light. At the time of release, ITPro commented that the iPhone 6 had 'the most realistic colour replication we've seen to-date' and Expert Reviews said 'in terms of image quality, the iPhone 6 is excellent'. In fact, camera specialists DxO labs found the camera to be the best ever on a smartphone in 2014. Of course, we've seen better smartphone cameras since but the iPhone 6 can still hold its own.

The 1.2MP front-facing camera saw significant improvement over the 5s, with improved brightness and built-in HDR, or High Dynamic Range, which combines several photos taken at different exposures to create a more detailed, realistic-looking image. Apple bumped the front-facing camera up to 5MP for the iPhone 6s, which Business Insider found took 'clearer, sharper and more detailed' photos than the 6. So while the iPhone 6's selfie camera takes decent shots, you may find it lacking if you've used any of the more recent iPhones.

The iPhone 6 launched with iOS 8 and has since shifted progressively to iOS 9, iOS 10 and iOS 11.

When it launched, iOS 8 introduced some clever new features, including the ability to swipe back and forward to move through apps and web pages and the option to save contacts directly from the email app.

Each iOS update has brought with it a variety of improvements. For example, iOS 9 added more than 150 emojis to the keyboard and introduced Mail Drop, which enables you to email large files through iCloud. It also slimmed down app download sizes with the App Thinning feature, allowing you to save valuable storage space. iOS 10 added the News app, made Siri more intuitive and upgraded Apple Maps with public transport directions.

Most recently, the iPhone 6 was upgraded to iOS 11, meaning it manages to stay relevant despite its age. However, its older hardware does struggle with the latest software so you may experience slower performance and reduced battery life.

In fact, it was recently revealed that Apple had introduced a feature for the iPhone 6, iPhone 6s and iPhone SE that deliberately slowed down their processing speeds when they were upgraded with the latest software. Apple said the feature was designed to prevent the phones from shutting down unexpectedly as a result of their older batteries. Many users were displeased by this and in response Apple reduced the cost of a battery replacement, which should return these handsets to optimal performance, from £79 to £25.

Designed to improve on the iPhone 5s, the iPhone 6 is equipped with a dual-core A8 processor and 1GB of RAM. The A8 delivers more than enough power to create a slick, responsive user experience, and it was powerful enough to contend with its rivals when it came out. The A8 processor is accompanied by a 'motion coprocessor' which is designed to assist with collecting data from the iPhone's sensors for use in health tracking and other context-aware applications.

The iPhone 6 saw a step up in battery life from the iPhone 5s. According to Apple, its battery would last 25% longer and its more efficient processor would draw 50% less power than the previous iteration. With moderate use the battery life should be more than adequate, getting you through to the end of the day, although heavier tasks like gaming, watching movies and downloading music have a tendency to sap the battery much more quickly. However, Apple added a Low Power mode with iOS 9, which will help with eking out your last bit of battery.

Like the iPhone 5s, the 6 has Touch ID. Although this has been replaced on newer iPhones by Face ID, it's still an effective method of securing the phone. It also contains an NFC chip, allowing you to take advantage of Apple Pay.

Every day, we search through thousands of tariffs and offers from UK online retailers to find the best Apple iPhone 6 deals and contracts across a selection of price points and needs.

Select 'Pay Monthly' if you're looking to get the Apple iPhone 6 as part of a monthly contract with minutes, data and texts. Alternatively, choose 'No Contract' if you prefer to buy the Apple iPhone 6 SIM Free or on Pay as You Go.

Finding the perfect deal is easy. Just use the sliders to filter tariffs for minutes, data, monthly cost and upfront cost. You can also filter by network and retailer to find the best Apple iPhone 6 deal for you!

The cheapest contract price in this category is cheaper than buying the Apple iPhone 6 SIM Free and a comparable SIM Only tariff by .
View SIM Only Contracts View SIM Free Prices

You could save on the cheapest contract price in this category by buying the Apple iPhone 6 SIM Free and a comparable SIM Only tariff separately.
View SIM Only Contracts View SIM Free Prices

Photos taken with the Apple iPhone 6